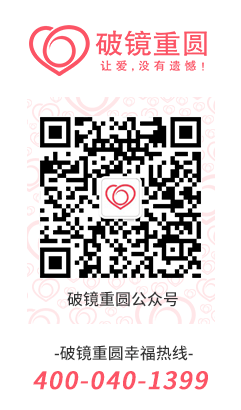 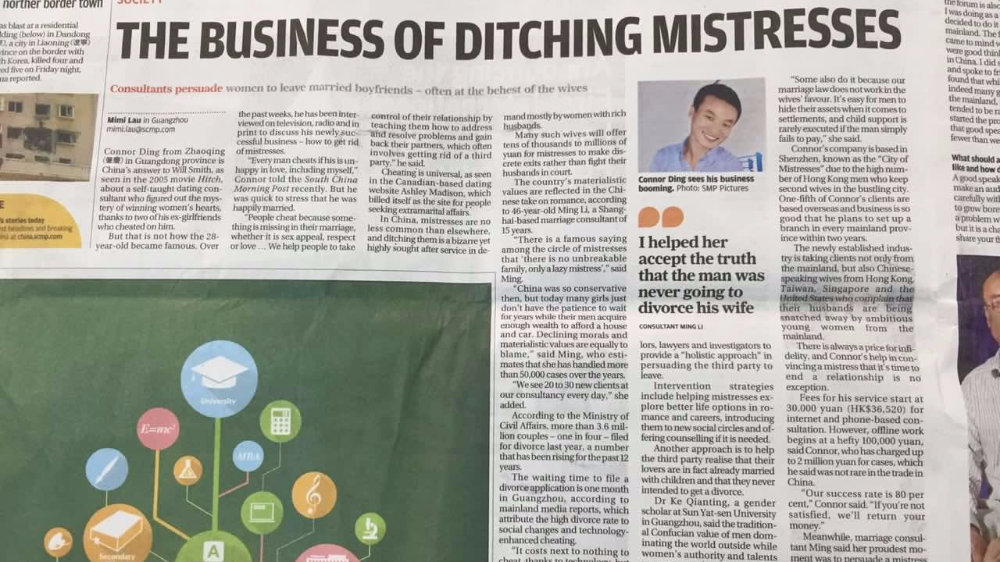 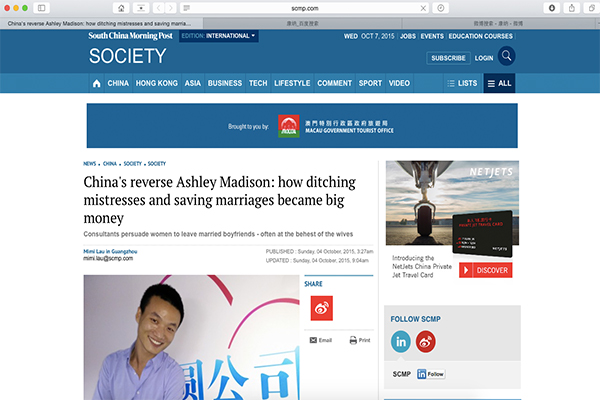 Connor Ding from Zhaoqing in Guangdong province is China's answer to Will Smith as seen in the 2005 movie Hitch about a self-taught dating consultant who figured out the mystery of winning women's hearts thanks to two of his ex-girlfriends who cheated on him.

But that is not how the 28-year-old became famous. Over the past weeks he has been interviewed on television radio and in print to discuss his newly successful business - how to get rid of mistresses.

"Every man cheats if he is unhappy in love including myself" Connor told theSouth China Morning Post recently. But he was quick to stress that he was happily married.

"People cheat because something is missing in their marriage whether it is sex appeal respect or love … We help people to take control of their relationship by teaching them how to address and resolve problems and gain back their partners which often involves getting rid of a third party" he said.

Cheating is universal as seen in the Canadian-based dating website Ashley Madison which billed itself as the site for people seeking extramarital affairs.

In China mistresses are no less common than elsewhere and ditching them is a bizarre yet highly sought after service in demand mostly by women with rich husbands.

Many such wives will offer tens of thousands to millions of yuan for mistresses to make discrete exits rather than fight their husbands in court.

The country's materialistic values are reflected in the Chinese take on romance according to 46-year-old Ming Li a Shanghai-based marriage consultant of 15 years.

"There is a famous saying among the circle of mistresses that 'there is no unbreakable family only a lazy mistress'" said Ming.

"China was so conservative then but today many girls just don't have the patience to wait for years while their men acquire enough wealth to afford a house and car. Declining morals and materialistic values are equally to blame" said Ming who estimates that she has handled more than 50000 cases over the years.

"We see 20 to 30 new clients at our consultancy every day" she added.

According to the Ministry of Civil Affairs more than 3.6 million couples - one in four - filed for divorce last year a number that has been rising for the past 12 years.

The waiting time to file a divorce application is one month in Guangzhou according to mainland media reports which attribute the high divorce rate to social changes and technology-enhanced cheating.

"It costs next to nothing to cheat thanks to technology but the cost of maintaining a marriage gets higher every day" said Connor referring to websites and social media platforms where strangers meet.

"Mistress-dispelling" as it is known is a booming industry where dating consultants form companies to hire teams of handsome gym instructors counsellors lawyers and investigators to provide a "holistic approach" in persuading the third party to leave.

Intervention strategies include helping mistresses explore better life options in romance and careers introducing them to new social circles and offering counselling if it is needed.

Another approach is to help the third party realise that their lovers are in fact already married with children and that they never intended to get a divorce.

Dr Ke Qianting a gender scholar at Sun Yat-sen University in Guangzhou said the traditional Confucian value of men dominating the world outside while women's authority and talents were respected within the home persists in modern society.

"This division of labour among partners hasn't changed so when something goes wrong in the house it's normally the wives who bring about changes or provide a solution" Ke said.

She added that many Chinese women endure unfaithful marriages for the sake of children.

"Some also do it because our marriage law does not work in the wives' favour. It's easy for men to hide their assets when it comes to settlements and child support is rarely executed if the man simply fails to pay" she said.

Connor's company is based in Shenzhen known as the "City of Mistresses" due to the high number of Hong Kong men who keep second wives in the bustling city. One-fifth of Connor's clients are based overseas and business is so good that he plans to set up a branch in every mainland province within two years.

The newly established industry is taking clients not only from the mainland but also Chinese-speaking wives from Hong Kong Taiwan Singapore and the United States who complain that their husbands are being snatched away by ambitious young women from the mainland.